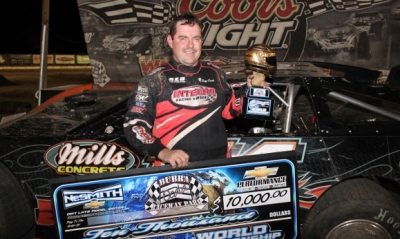 Cook had the right set up and the driving experience on a hard slick track, as he took the lead on 43 and never looked back to claim the $10,000 top prize in the Crate Late Model event.

“Howard Stalls asked me to drive for him in this race at the beginning of the season, and they’ve been building it since then, like that old Johnny Cash song 'One Piece At A Time' and tonight it made some cash, too,” Cook said. “We had trouble last night in qualifying, and had to come through the B-main to make the race, but we had the right set up with tires and shocks to get us to the front.”

Once the car was finished, the Stalls crew installed a brand new Chevrolet Performance 604 Engine right out of the crate they bought at NeSmith Chevrolet in Claxton, Ga., for $5,195, paying for the engine its first night on the racetrack.

Once Cook took the lead on lap 43, he packed his bags, turned in the key and checked out on the field to take a 5.942-second margin of victory at the checkered flag. By winning the race from the 19th starting spot, Cook also earned the Hedman Husler of the Race Award for a $100 bonus. Before Cook took control of the race, there were five lead changes in the 100-lap event.

Mike Pegher Jr. of Wexford, Pa., guest-starring for Bobby Lake Motorsports, finished second followed by series Rookie of the Year Kyle Bronson of Brandon, Fla., who came back from a cut tire.

It was an up, down, and up night through the field for Bronson. After starting 13th, Bronson charged up to the third spot by lap 14, but cut down cut down a left-rear tire on lap 15 that sent him to the pit area. Bronson restarted at the tail end of the lead lap, and raced his way back through the field to as far up as second by lap 62.

William Thomas of Phenix City, Ala., led laps 41-42 and finished fourth and Walker Arthur of Forest, Va., was fifth. Series champion Ronnie Johnson of Chattanooga, Tenn., started 23rd and finished sixth, the last car on the lead lap. Johnson borrow Riley Hickman’s car for the main event after problems with his primary machine in his consolation race.

Many of the cars that started at the front of the field and ran in the top five during the first half of the race were not around for the checkered flag. At the start of the race, hometown driver and fast qualifier Ivedent Lloyd Jr. took the lead followed by Justin McRee, Ryan Montgomery, Josh Adkins and Dalton Myers.

The first of 11 caution flags came out on lap four when Jake Perkins in turn two. Lloyd restarted with McRee, Montgomery, Pegher, Adkins and Myers in tow. Montgomery drove under McRee on the restart to take the second spot. J-Mac got his car wound up on the outside to retake the position on lap five, and Shan Smith charged up to the fourth position. On lap seven, Shan Smith was glued to the bottom groove of the track and drove under Montgomery to take third.

Lloyd wasn’t able to shake the field after the lap-four restart as McRee chased him down to battle side-by-side for the lead on lap eight, but before the war could be waged for the point, debris in turn three brought out the caution flag and set up another double-file restart.

Shan Smith continued to be hooked up on the bottom groove and passed Lloyd for the lead on the restart coming off the second turn. McRee was running third, but slowed off the pace on lap 14 to bring out the caution flag. That moved Bronson up to the third spot for the restart that quickly went back to yellow when Jimmy Sharpe Jr. spun coming off the fourth turn.

The yellow came out again on lap 15 when Bronson cut down his left-rear tire and reshuffled the field with Shan Smith leading Lloyd and Cook up to ninth.

Lloyd got wound up on the outside groove to sail around Smith for the lead in turn two on the restart. Thomas charged from sixth to third on lap 16. Adkins got around Thomas for third on lap 19 while Whitener took over the fifth spot. Adkins was on the move again on lap 21 when he sailed around the outside of Shan Smith to take the second spot.

Whitener passed Thomas for fourth on lap 22 just before the field was slowed by a debris caution on lap 23. Shan Smith drove back under Adkins for the second spot on the restart, while Whitener and Thomas got by Adkins on lap 24 to move up to third and fourth respectively. Myers spun in turn four on lap 25 to bring out a caution flag to set up another double-file restart.

When the green flag came out, Lloyd went high in turn one, while Smith challenged on the bottom . That left the middle groove open for Whitener to make it a three-wide battle for the lead in turn two. As the lead trio shot off the second turn, Whitener took the lead followed by Lloyd and Smith.

Thomas sailed around the outside of Shan Smith to take over the third spot on lap 27, and by lap 33, Whitener was beginning to lap the cars on the tail end of the lead lap. Austin Kirkpatrick spun in turn four on lap 36 to bring out yet another caution, and another quick yellow appeared for Jeff Mathews.

When the field went back to green flag action, Bronson charged from seven to fourth by lap 37. As the racing surface began to get black and slick, Cook’s race car came to life as he powered his way from eighth to fourth by lap 39. Two laps later, the entire complexion of the race would dramatically change at the front of the pack.

With Whitener holding a comfortable lead, he suddenly slowed off the pace in turn three on lap 41 to bring out the caution flag. When Whitener went to the pits, Lloyd took over the lead, but as the cars were lining up for the double file restart, Lloyd also had to dive into the pits after cutting down a right-rear tire.

That gave Thomas the lead followed by Cook, Bronson, Shan Smith and Pegher. Lloyd came out of the pit area with a fresh right-rear tire and restarted 17th as the last car on the lead lap.

When the field went back to green flag racing, Cook moved up to challenge Thomas for the lead on lap 42. Cook was able to drive under Thomas to take the lead on lap 43 coming off the fourth turn.

Cook extended his lead the read of the way, leaving Pegher and Bronson to sort things out for second in the late stages.

The NeSmith Chevrolet Dirt Late Model Series will return to Ocala to open the 2014 season with five straight nights of Speedweeks racing on Jan. 28 through Feb. 1.