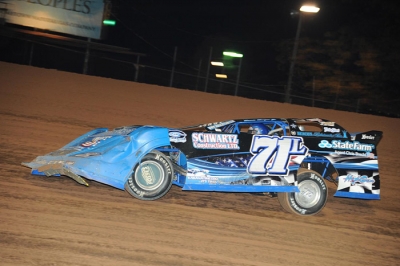 Hawkins took the checkers first, but his car was disqualified in postrace technical inspection because it had illegal merge collectors on the headers.

Lunger, who started 13th and rallied with a new powerplant after problems in Friday’s heat, was moved up to first after crossing the line second in the season finale.

"That car was just awesome tonight,” said Lunger, who became the 12th winner in 24 races on the first-year series. “I had to run right around the bottom, but we were going forward so I decided to just hold it down there and it was really good.”

Chad Ruhlman of Bemus Point, N.Y., was third followed by Butch Lambert of Valencia, Pa., who had previously announced his retirement. Max Blair of Centerville, Pa., rounded out the top five.