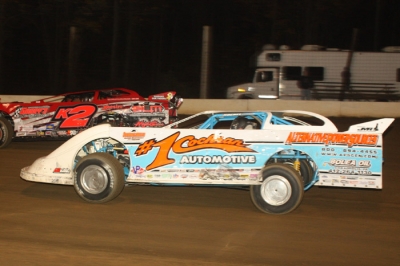 Jacob Hawkins of Fairmont, W.Va., was second at the finish with Michael Lake of Unionton, Pa., third. Chad McClellan of Stoysown, Pa., and John Over of Uniontown, Pa., rounded out the race’s top five finishers.

Pegher, who went from leading the tour’s standings 18 points to trailing by 17 after an Oct. 11-12 doubleheader at Pittsburgh Pennsylvania Motor Speedway, will enter the tour’s season finale Oct. 25-26 at Lernerville (Pa.) Speedway trailing Ryan Montgomery of Fairmont, W.Va., by seven points after Montgomery finished sixth in Friday’s event.

"We're good friends with Montgomery," Pegher said. "We had a bad weekend last week at Pittsburgh with a 10th and a 17th. He's a good racer and hopefully we can get it done next weekend. We've (chased a championship) the last few years and have never been this close so hopefully we can get it done. We haven't had near as many DNFs this year so that's always a good thing."

The event was originally scheduled as a two-day program but was condensed to a single-day show due to forecasts calling for cool weather Saturday night.