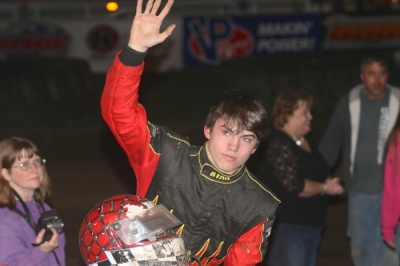 Montgomery raced to the tour’s most dominating victory of the season with a half-lap lead at the finish. He earned $1,500 for the his fourth series victory of the season, which moves him into a tie with standouts Mike Pegher, Jr. and Max Blair for the most victories on the first-year Crate Late Model series.

"We waited til the last minute, looked at the race track to see how it was, and it ended up being good," said Montgomery, whose victory came on the first night of the 25th annual Pittsburgher 100 weekend at PPMS. "It started to get tight toward the middle of the race, but I adjusted my brakes and it was fine. I really wasn't that comfortable at all times. I split a couple cars and didn't feel comfortable doing that, but I figured they were beating down on my back door.”

Holtgraver settled for second at the half-mile oval with Chad Ruhlman of Bemus Point, N.Y., third while Dennis Lunger Jr. of Albion, Pa., and Blair of Wexford, Pa., rounded out the top five.

Friday’s event that ran in support of Jason Feger’s $10,000 victory in National Dirt Racing League action. The Pittsburgher 100 continues Saturday with a $25,000-to-win event for NDRL Super Late Models and a $3,000-to-win race for the RUSH Series.