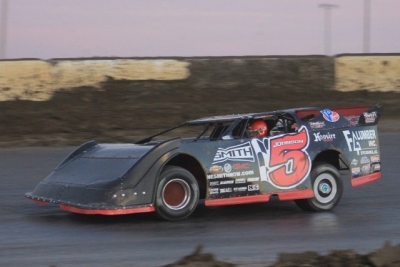 The $5,000 win gave Thomas a clean sweep of the racing program as he set fast time and won the first heat race Friday night to earn the pole starting spot for Saturday’s main event before rain delayed the race until Sunday evening. Thomas took the lead from Johnny Stokes of Columbus, Miss., on the sixth lap and never looked back to carry a 2.309-second margin of victory under the checkered flag.

“We were surprised the track was as dry as it was with all of the rain we had here Saturday night, but the top was good for us all of the way around early in the race, and then it started taking rubber late in the race in turns three and four,” Thomas said. “We went to the inside there, but there was still enough moisture in the track on the high side of turns one and two, so we kept it up there and just tried to keep it off the wall.”

Stokes finished second, though he actually made more laps around the track than any other competitor on Sunday. Stokes, a race promoter as well as a veteran racer, worked the road grader to help Greenville Speedway officials get the track in race shape by late Sunday afternoon.

“This Championship really means a lot to me because it has been awhile since I’ve run for a championship,” Johnson said. “We really weren’t planning on running for the championship, but after we were second in points after the Memorial Day Weekend races, several people stepped up and offered to help me if I would run for it. There are just too many people to thank, but this championship is for them and the fans that have stuck with us all of these years.”

Notes: Thomas drives a GRT Race Car sponsored by Alexander’s Industrial Service and Austin Trucking. ... A fundraiser was held in conjunction with the event, raising $13,275.85 for the American Cancer Society. ... The NeSmith Series takes a lengthy break before wrapping up the season with a $10,000-to-win event Nov. 22-23 at Bubba Raceway Park in Ocala, Fla.