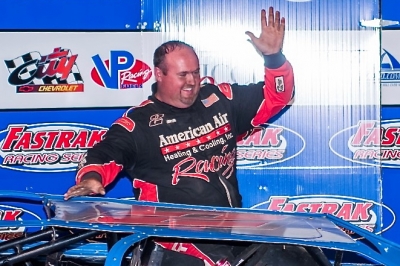 Jensen Ford of Piney Flats, Tenn., was second at the finish of the 75-lap race, which brought together Crate Late Model competitors from all Fastrak regions in wrapping up the organization’s season. Wayne Robertson of Corning, N.Y., was third with Lee Cooper of Woodruff, S.C., and Andrew Satterlee of Rochester, Mills., Pa., rounding out the top five. | Slideshow

Brandon Umberger of Rural Retreat, Va., initially finished third in the World Challenge and 21st in the World Championship, but both finishes were disqualified due to unsportsmanlike conduct. Fastrak also suspended Umberger from series events through 2014.