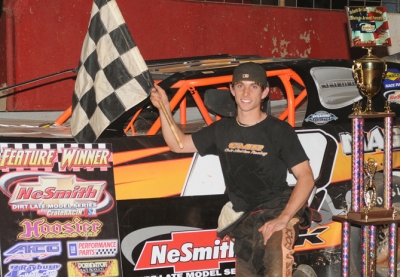 SYLVANIA, Ga. (May 24) — Series rookie Hunter Peacock of Macon, Ga., overtook race-long leader Chip Brindle of Chatsworth, Ga., on the 35th lap and led the rest of the Salute To The Armed Forces 50 at Screven Motor Speedway for his first NeSmith Chevrolet Dirt Late Model Series victory. The fast-qualifying Peacock started on the pole for a series-leading third time in grabbing the $3,000 victory despite falling back as far as third in the first half of the race.

“I saw Chip start pushing up the track in the middle of the turns, I saw an opening and went for it,” the 20-year-old Peacock said. “I’d like to thank Chip for racing me clean. He’s my buddy.”

Brindle, the series points leader, settled for second followed by Jordy Nipper of Gray, Ga. Jay Blair of Angie, La., finished fourth after mechanical problems in his No. 2x forced him into a Brindle backup car. Eighth-starting Jason Hiett of Lincoln, Ala., rounded out the top five.

Notes: Peacock's Bullitt Chassis is sponsored by Nasworthy Mechanical. ... The race was slowed by seven cautions, the worst on lap 38. Chris Tays of Corinth, Miss., who had run as high as second, spun in turn four. Mike Parkerson of Columbus, Ga., slammed into the front of Tays' car. Neither driver was injured. ... Ted Lackey of Munford, Ala., earned hard charger honors for his 24th-to-14th run. ... The series takes a break before a June 20-21 weekend at North Alabama Speedway and Columbus (Miss.) Speedway.