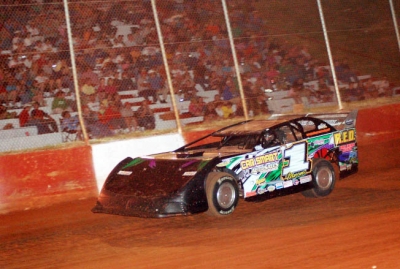 ROME, Ga. (May 25) — Todd Morrow of Old Fort, Tenn., took the lead on the 10th lap and never looked back in earning a $2,000 victory on the Carl Black Top Tracks Challenge Series at Rome Speedway. Matthew Turner finished second followed by Alan Brewer, Blake Stewart and Dale Thurman in front of a standing-room only crowd at the 4/10-mile oval. | Slideshow

Polesitter Matthew Turner took the lead at the outset and was out front through four cautions in the first nine laps. On the lap-nine restart, Morrow got moving up on the high side and swept into the lead exiting turn four. Ronnie Johnson quickly moved up to second and had his sites on Morrow. But during a lap-22 caution period for debris on the track, Johnson pulled pitside with a flat tire. Morrow ran unchallenged the rest of the way.