Lukon holds off Montgomery at PPMS 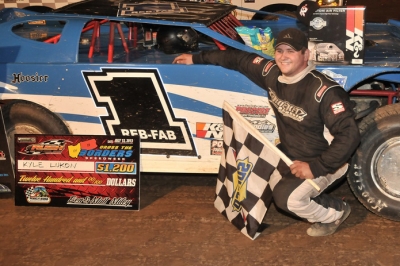 IMPERIAL, Pa. (July 13) — Kyle Lukon of Burgettstown, Pa., came out on top of a wild 25-lap feature by a mere 0.206 of a second over Ryan Montgomery on Saturday at Pittsburgh's Pennsylvania Motor Speedway to become the season's seventh winner on the Sweeney Chevrolet-Buick-GMC RUSH tour for Crate Late Models.

Though the 23-year-old standout led every lap in his first series start, Lukon had the region's best right behind him including the hard charge by the ninth-starting Montgomery to hold on for the $1,200 victory. Mark Moats Jr. was third on a night when a season-high 40 cars packed the pits while Mike Pegher Jr. and Justin Tatlow rounded out the top five in the third round of the Cross the Borders Speedweek.

After a 10-car pileup on a restart slowed the action, Montgomery threw everything but the kitchen sink at Lukon in the final five laps.

The two raced side-by-side on several occasions, but Lukon had the momentum off the high side to hold off Montgomery's last-lap charge to the finish. Lukon notched his fifth victory of the season at PPMS.