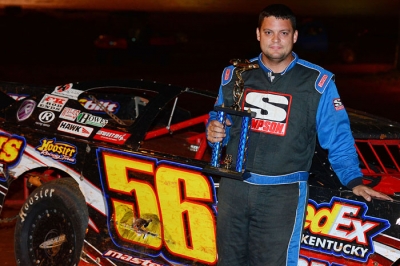 CLARKSVILLE, Tenn. (June 29) — Jeff Walston of Paducah, Ky., wrapped up the UMP Crate Speedweek title on Saturday at Clarksville with his fourth victory in the six-race miniseries.

Walston didn’t cross the finish line first, however. Credence Mott of Vienna, Ill., took the checkers first, but he was disqualified after postrace engine inspection, handing the victory to Walston.

Clayton Miller of Elkton, Ky., was elevated to second in the 10-car field while Levi Asby, Evan Taylor and Jacob Minon rounded out the top five.

Mott led every lap from the pole position, but tech inspectors found that his carburetor spacer was over the 1-inch maximum allowed by the UMP rulebook.