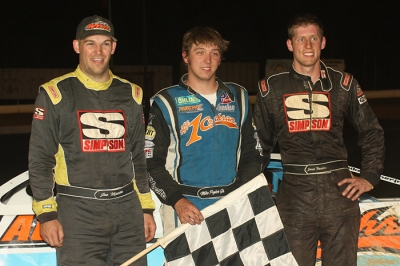 Pegher held off a hard-charging Jared Hawkins of Fairmont, W.Va., for the 30-lap victory and to tighten his hold on the series points lead along with the RainEater Wiper Blades Mid-Atlantic Triple Crown point lead heading into Sunday’s finale at Allegany County Speedway in Cumberland, Md.

"I kept watching the scoreboard and seen Jared was coming,” the 27-year Pegher said. “I knew the outside was probably getting faster around the cushion so I chanced it and took it the outside for the final restart. It was a good race and I'm glad to be back up here again. I have to thank Mike Brunner for all the time and work he put in at the shop this week, all my sponsors, Lynn Geisler, and the fans for coming out.”

Pegher started on the pole and took off with fast qualifier Ryan Montgomery and John Over giving chase. He built a straightaway lead by the sixth lap that was erased by Louis Krushansky’s lap-eight yellow.

Resuming the race, Pegher stayed in control while Hawkins worked his way into the top five, taking fourth from Joe Martin on the 12th lap and using the high groove to get by Over a lap later. Hawkins took second from Montgomery on lap 17.

Michael Lake’s spin zapped a 3.4-second advantage for Pegher and halted the race nearly 20 minutes because of problems with the lights.

Pegher edged away on the restart, but Hawkins began tracking him down in the final laps. Pegher held on for a 0.625-second margin of victory over Hawkins, who was subbing in Chad McClellan’s regular ride.

“I had a lot of fun tonight,” said Hawkins, who also finished second in the modified division. “I haven't been in a modified for a while, and never drove a crate car. I enjoyed both.

"We're trying to cut back laps on our Super Late Model stuff to get geared up for a couple big races. I'm just glad I got the opportunity to race. I have to thank Chad and his brother for getting to do this and Kevin for letting us drive the modified.”

Martin finished third with Montgomery and Ken Herman rounding out the top five.