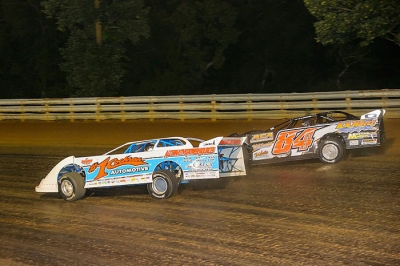 Mike Pegher Jr. (1) gets an edge on Andrew Wylie (84) at Hagerstown. (wrtspeedwerx.com)

“The other time we were here for the crate race was the first time I was ever here,” Pegher said. ”This place is pretty cool and we’re excited to come back and get the 100th career win is pretty awesome.”

Dash winner D.J. Troutman led the first lap, but spun after tangling with Andrew Wylie in turn two on the second lap. Wylie took over on the restart, but the seventh-starting Pegher was in control by lap four.

Pegher was cruising out front while Satterlee moved into second on the sixth lap. A lap-11 caution gave Pegher clear racetrack while Elliott moved into third on lap 13 and tried to chase down Satterlee.

When Pegher hit lapped traffic on lap 21, he had a two-second lead. Satterlee never challenged, finishing 1.696 seconds behind as Pegher had a cushion of two slower cars.

“We kept watching the track and the Super Lates,” Pegher said. “The last time we were here we were a little bit loose all night long so we spent some extra time on the scales this week to make sure it was prefect.”