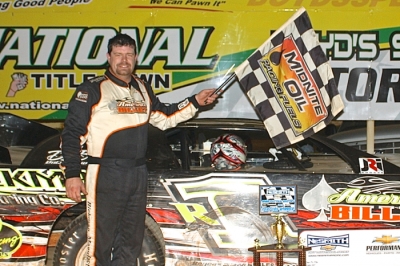 Dennis Franklin of Gaffney, S.C., dusted off the high groove on the tight around the tight track in advancing from the 10th starting spot to finish third. Ronnie Johnson of Chattanooga, Tenn., finished fourth and Scott Dedwylder of Vossburg, Miss., took the fifth spot.

Johnson gained some ground on Hollingsworth in the battle for the $20,000 NeSmith Series Championship, cutting Hollingsworth lead to 12 points as the series moves to 411 Motor Speedway in Seymour, Tenn., on Saturday for the $4,000-to-win J.T. Kerr Memorial.

Hickman took the lead at the drop of the green flag, but even with his domination of the race, there was plenty good racing in his wake. Morrow came from his third starting spot and was able to get under the outside front row-starting Dedwylder coming off the second turn on the first lap to grab the second spot, while Wilson settled into the fourth position with Johnson fifth.

The first of three caution flags came out on lap six when Ken Monahan of Lakeland, Fla., and David Duplissey of Chattanooga, Tenn., tangled in turn one. Kyle Bronson of Brandon, Fla., was ticketed with the caution flag, and went to the pack of the pack for the double-file restart.

Hickman had Morrow and Dedwylder doubled up behind him for the restart. When green flag came back out, Johnson got by Wilson for the fourth spot, and Franklin got by both Smith and Wilson to move up to fifth.

Hixson brought out the second caution flag on lap 23 when he slowed in turn four while running eighth. With most of the field running the bottom groove of the track on the restart, Franklin stepped to the high side and passed Wilson for fifth on lap 24. Three laps later, Franklin sailed around the outside of Johnson on the front straightaway to take fourth.

Duplissey spun in turn two on lap 28 to bring out the third yellow flag of the race. During the caution period, Justin McRee dropped out of the seventh spot and went to the pit area.

Franklin once again got rolling on the outside after the restart and drove around Dedwylder to take the third spot on lap 29. Johnson then closed in on Dedwylder to battle for fourth, taking the position with an inside move on lap 32.

With five laps to go, Hickman began working lapped traffic with a half-straightaway lead over Morrow. Hickman was able to maintain the advantage to take the win with a 2.196 second advantage over Morrow.