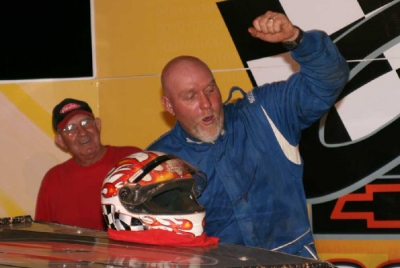 GASTONIA, N.C. (May 9) — Ron Parker of Belwood, N.C., earned $2,000 for his Fastrak Racing Series victory at Carolina Speedway. John Pursley of Clover, S.C., kept pressure on the winner through most of the race but settled for second ahead of Brandy Baker of Lancaster, S.C., while Matt Long and Ross Bailes rounded out the top five. The last two finishers in the rundown, Jonathan Davenport and Johnny Pursley, were involved in an altercation. Davenport was spun early in the race and used the high groove in working his way back toward the front. He made contact with Johnny Pursley, causing Pursley to spin, and Pursley spun Davenport's car during the caution period, causing the cars to hook together. Davenport climbed from his car and punched Pursley before track officials could pull him away. Both drivers were sent off the track. | Slideshow