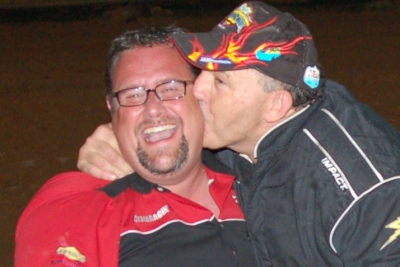 HATTIESBURG, Miss. (May 9) — Lucky Keeton of Toomsuba, Miss., scored a clean sweep in the NeSmith Chevrolet Dirt Late Model Series 40-lap main event at Southern Speedway. The fast qualifier, led every lap, and took his first career win on the series to earn $3,000. Series rookie Hunter Peacock of Macon, Ga., challenged Keeton for the lead early in the race, but the defending and two-time NeSmith Chevrolet Weekly Racing Series West Region Champion held the youngster off for the win. | Slideshow

“I’ve raced here enough to know that I had to go catfishing and cover the bottom of the race track,” Keeton said. “I thought (Peacock) would go by me on the outside early in the race, but later in the race, I knew he’d wash up the track, and I’d get back by him. This has got to be the biggest win of my career, and the one that means the most to me.”

Peacock could pull along side Keeton on the outside, but Keeton was stronger off the fourth turn to maintain the lead he never relinquished. During the second half of the race, Peacock had a strong challenger in Matthew Turner of Dawsonville, Ga. Turner was able to get inside Peacock to challenge for second on two different occasions, but could never made the attempt stick. Mike Boland of Cuba, Ala., took fourth from Ted Lackey of Munford, Ala., on the 39th lap and held that spot the rest of the way. Series points leader Jeff Fields of Aragon, Ga., was eighth.

Notes: Keeton drove to victory in a Trak-Star car. ... Eric Coolie earned hard charger honors by starting 22nd and finishing 14th. ... The race was slowed by four cautions. Michael Santangelo slowed in turn two on the 11th lap, Billy Riels spun in turn two on the 19th lap and Herman Reynolds spun on lap 25, collecting Kody Barber and Curt Lipsey. Another yellow appeared for debris. ... The series runs May 10 at A-1 Raceway in Slidell, La.