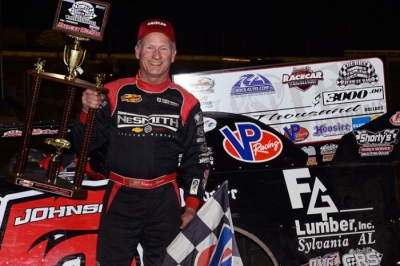 OCALA, Fla. (Feb. 2) — It was good to have the first name of Ronnie or Ronny at Bubba Raceway Park for the finale Rock Auto.com Speedweeks presented by Racecar Engineering.

Johnson earned $3,000 for his 15th career tour victory, his first in more than two years. Hollingsworth, who posted miniseries victories Tuesday, Wednesday and Friday, earned an extra $2,000 for the points title.

Hollingsworth pocketed a total of $8,825 prize money and points fund awards to top more than 70 drivers entering events. Johnson’s five-night total of $5,860 put him second on that list as the series averaged 62 drivers per night.

Johnson was glad to end his series drought on end after taking the lead on lap 23 from Justin McRee and racing to a victory by nearly four seconds.

ï¿½“I’ve been waiting for a racing surface like this all week,” Johnson said. “The track has been good this week, but tonight was the kind of track that really suits my driving style. We could race from top to bottom, and that really helped me get through lapped traffic. This is a special win because we haven’t won a NeSmith race for a couple of years.”

Alabamians Hollingsworth and McRee started on the front row of a race slowed a single time for a first-lap caution when Brad Smith tagged the frontstretch wall, collecting several competitors.

After the cleanup, McRee got the jump on Hollingsworth with Kyle Bronson, Johnson and Josh Adkins giving chase. The frontrunners reached traffic after 10 laps with Arthur on the move, reaching fourth spot by lap 16.

Johnson took second from Hollingsworth on the 20th lap, then closed in on McRee, taking the lead with a frontstretch pass just before the midpoint. Johnson opened up a full straightaway advantage by lap 30 and cruised the rest of the way.

The next event for the NeSmith Chevrolet Dirt Late Model Series will be the third annual Rumble On The Gumbo 75 at Greenville (Miss.) Speedway on April 12-13, a $5,000-to-win event.