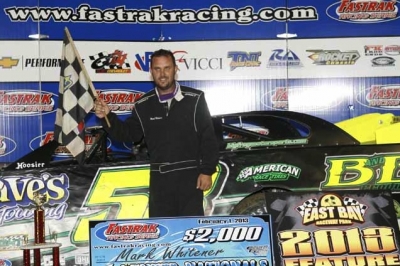 Mark Whitener made another trip to victory lane. (ricksdarkroom.com)

Franklin settled for second with Keith Nosbisch of Valrico, Fla., in third. Brandon Umberger of Rural Retreat, Va., and Chris Cantrell of Chester, S.C., rounded out the top five.

Umberger and Devin Dixon started on the front row with Franklin in pursuit at the outset, but a first-lap scramble in turn four was triggered when Bill Tesh got loose, collecting Phillip Cobb, Steven Mathis Jr. and Jamie Slatton.

Several other early cautions continued to hamper the action, including David Smith’s spin that collected Colton Flinner and Doug Watson, and then when Smith’s teammate Chris Ferguson spun on lap five for a big pileup.

The race finally got rolling with green-flag racing from laps 5-27 with Whitener and Franklin battling up front. Late cautions for Rick Singleton and Cobb set up a two-lap dash to the checkers, and Whitener fought off Franklin at the finish.

Fastrak action at East Bay wraps up Saturday with the $3,000-to-win finale.