Red-hot Hollingsworth makes it 3-for-4 at Ocala 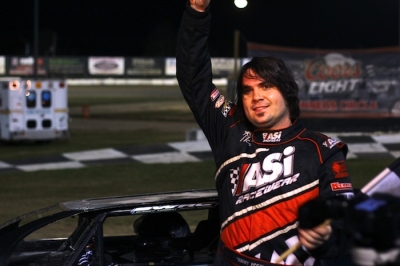 OCALA, Fla. (Feb. 1) — Ronny Lee Hollingsworth of Northport, Ala., returned to familiar ground on Friday night at Bubba Raceway Park as he pulled his Sparks Motorsports Special into victory lane for the third time in four nights of Crate Late Model action. Hollingsworth netted $2,000 in winning the fourth round of the Rock Auto.com Speedweeks presented by Racecar Engineering on the NeSmith Chevrolet Dirt Late Model Series. | Video | Slideshow

Hollingsworth started fifth and worked his way to the front of the pack to take the lead on the sixth lap. “Right Foot” Ronny then held off a late-race challenge from 10th-starting Jonathan Davenport of Blairsville, Ga., to take the $2,000 victory.

“We’ve been good here since we unloaded for practice on Monday, and tonight we just tried to stay out of trouble in the early laps,” said Hollingsworth, whose only loss of the week came after a collision while battling for the lead. “Once we took the lead we were committed to the bottom of the racetrack. I got into Davenport one time, and I apologize for that, but I guess that’s just part of racing trying to hold your ground.”

Davenport took second for his best finish of the week while Hall of Famer Ronnie Johnson of Chattanooga, Tenn., was third for the second straight night. Tait Davenport of Benton, Ky., and 18th-starting Ivedent Lloyd Jr. of Ocala rounded out the top five.

Two more quick cautions appeared, including a scramble on a restart that forced two time champ and series points leader David Gentry to the pits for lengthy repairs.

On a lap-six restart, Hollingsworth took second from Tait Davenport heading into turn one, then overtook Pegher to take the lead exiting turn four.

After a lap-33 yellow when Pegher and Mack McCarter tangled on the frontstretch battling for sixth, Ryan Montgomery spun running six on the restart.

That set up a dash to the finish with Hollingsworth keeping his pursuers at bay over the final laps.