Bronson fades, rallies to win wild one at Ocala 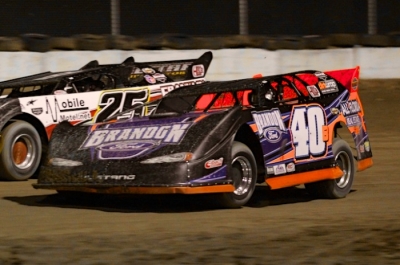 Bronson led the first 14 laps of the race before dropping back to the fourth spot, but he rallied back to survive a tangle in front of him between the top two cars. That incident led to Bronson reclaiming the lead on lap 32.

Bronson then held off a challenge from two-time series champ David Earl Gentry of Murfreesboro, Tenn., to take his first series victory with a 1.216 second margin of victory. Bronson finished second in Tuesday’s 40-lap opener.

“There were slide jobs being thrown all over the place tonight, so when I saw how we were going to race, I got in there with them,” Bronson said. “There is some great competition here, so it feels great to win and we’re looking forward to the rest of the week.”

Ronny Lee Hollingsworth of Northport, Ala., winner of Tuesday and Wednesday’s features, led 15 laps but spun to the infield in a lap-31 tangle with fellow Alabamian Justin McRee.

The polesitter Bronson led at the outset over Hollingsworth, McRee and Canadian invader Darren Peters, but Horton was on the move early in racing up to second, challenging Bronson for the point by lap seven as the frontrunners entered traffic.

McRee picked up his pace on lap 17 when he dove under Horton in turn three to take the third spot, One lap later, McRee got by Bronson for second and Horton dropped Bronson to fourth. The first of four caution flags appeared on lap 19 when John Over of Uniontown, Pa., nosed into the frontstretch wall.

Hollingsworth led the doubled up McRee, Horton, Bronson and Gentry back to green with Bronson quickly moving back to second. McRee edged back ahead on lap 20, and Branson again fell to fourth behind Horton on lap 28.

After a caution for Matthew Turner’s turn-four stall on lap 29, McRee challenged Hollingsworth on the restart. They tangled coming off turn two and Hollingsworth spun to the infield on the backstretch, bringing out the thirdï¿½ yellow. McRee was out front on the restart followed by Gentry, Bronson, Horton and Joey Coulter.

Bronson turned up the wick on the restart by getting around Gentry for the second spot, and moved right up to challenge McRee for the lead before the final yellow on lap 32 for a slowing Larry Harrod.

McRee retired with mechanical problems during the caution period, and Brnton held off Gentry the rest of the way while Johnson charged from sixth to third in the final nine laps.