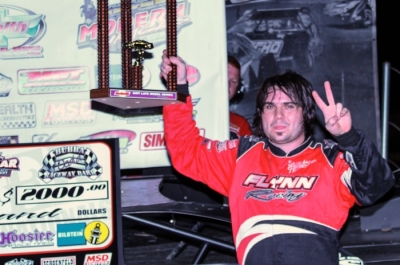 Ronny Lee Hollingsworth made it two in a row at Ocala. (photosbytrace.com)

OCALA, Fla. (Jan. 31) — Ronny Lee Hollingsworth is on a roll in NeSmith Chevrolet Dirt Late Model Series RockAuto.com Speedweeks presented by Racecar Engineering action at Bubba Raceway Park. The Northport, Ala., driver scored his second victory in as many nights during Wednesday night’s second round of the five-race Crate Late Model miniseries, earning another $2,000 after assuming the lead when Brad Smith spun while leading midway through the 40-lap race. | Slideshow | Video

Hollingsworth, who led flag-to-flag to claim Tuesday night’s opening round feature, crossed the finish line Wednesday night with a 2.340-second advantage over Walker Arthur of Forest, Va., who finished second ahead of Justin McRee of Cottondale, Ala. Smith of Dade City, Fla., advanced from the 10th starting spot to finish fourth with 11th-starting Chase Washington of Houlka, Miss., rounding out the top five.

Polesitter Tait Davenport of Benton, Ky., grabbed the lead on the start of the race followed closely by Brad Smith in second and Hollingsworth third. Arthur stayed with the top three to make it a four-car battle for the lead during the early poritions of the race, with Ocala’s surface providing multi-grooved racing.

Smith got an outside run on Davenport exiting turn two on lap five, and took the lead going down the backstretch. Smith tried to pull away, but couldn’t shake his challengers. Davenport, Arthur and Hollingsworth all stayed within striking distance of the leader with Davenport glued to the inside groove of the speedway while Arthur and Hollingsworth challenged on outside cushion.

Arthur sailed around the outside of Davenport on lap seven to take the second spot, and Hollingsworth passed Davenport for third on lap nine. Smith began to encounter lapped traffic by lap ten, as Arthur, Hollingsworth and Davenport closed the gap. Hollingsworth was able get by Arthur for second on lap 11 coming off the fourth turn.

Smith’s solid run came to early end on lap 12, when, with the lead quartet still battling, he spun to bring out the first of the race’s two cautions. The untimely spin earned Smith the Dominator Race Products Hard Luck of the Race Award and gave Hollingsworth a lead he would never relinquish.

Arthur was able to stay close to Hollingsworth after the restart, but the lead duo pulled away from Davenport. The field was slowed for the final time on lap 24 when Kyle Bronson of Brandon, Fla., stalled in turn two. Hollingsworth controlled the remaining distance, pulling away from Arthur at the finish.

As Hollingsworth and Arthur pulled away, Davenport began to fade and loss the third spot when McRee threw a slider turn two on lap 25. Shan Smith also passed Davenport for fourth on lap 26.

McRee and Smith locked into a side-by-side battle for the third spot on lap 35 that lasted the remainder of the race with McRee claiming the position at the finish line.

Bubba Raceway Park hosts round three of the five-race miniseries Thursday, with another 40-lap, $2,000-to-win main event highlighting the night’s action. Hollingsworth leads the miniseries points standings with a perfect 200 points. He has a 14-point advantage over McRee.