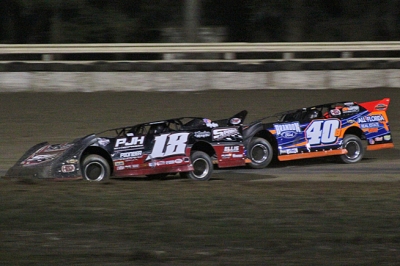 Hollingsworth held off a late-race charge from Kyle Bronson of Brandon, Fla., taking the checkered flag with a .744 second margin of victory. Bronson took the second spot with Jonathan Davenport of Blairsville, Ga., taking the third spot in his first full-time start for AES Racing.

Justin McRee of Cottondale, Ala., and Jeff Mathews of Valrico, Fla., rounded out the top five finishers on the Crate Late Model tour’s first race of 2013, which drew a whopping 67 entries.

Hollingsworth led from the outset Bronson, Davenport, Mathews and Jake Teague, setting a fast pace and lapping slower cars after just five laps. The first of four caution flags came out on lap 19 when Shan Smith spun in turn four.

The second caution came out on lap 24 when Phillip Cobb triggered a multi-car tangle coming off the fourth turn.

Hollingsworth led the field back to green, but the restart saw the third yellow when Johnny Collins spun exiting turn four. Teague lost three positions on the restart to fall from the top five.

With 10 laps remaining, Bronson found a middle groove that helped him close in on Hollingsworth and challenge for the lead. While Hollingsworth ran the inside groove, Bronson was able to get outside the leader on a couple of occasions in turns three and four. A late-race caution flag would interrupt the battle for the point.

Ivedent Lloyd Jr. had problems on lap 36 while running fifth when he stalled in turn three to bring out the fourth and final caution flag.

In the five-lap dash to the checkered flag, Hollingsworth moved up the race track, which slowed Bronson’s momentum, and kept him in front for an early-morning victory after the program was delayed two hours by a rain shower after the second consolation race.

The second night of Ocala’s five-race set is scheduled for Wednesday with another 40-lapper paying $2,000-to-win.