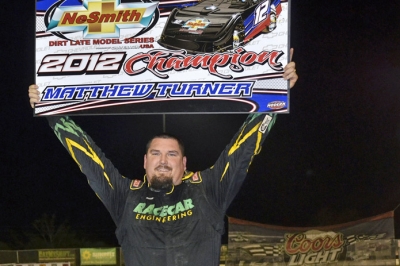 Turner won the $20,000 title driving his Hedman Husler Special by 10 points over two-time series champion David Gentry of Murfreesboro, Tenn. It was an up and down weekend for both drivers, as they exchanged the point lead twice during the event. | Lloyd wins finale

“After 146 consecutive races and eight years of trying, we finally got this championship, and it was really nerve-wracking to get it,” Turner said. “David Earl is a tough competitor, and we have traded having bad luck all season. I hated to see him cut down that tire because I really wanted to win the championship racing with him right down the end.”

Turner held a 16-point lead over Gentry coming into the weekend. Gentry had a mechanical problem during the Thursday night practice session and had to change engines on Friday morning.

Turner was the fastest qualifier in his group, and started the fourth 10-lap heat race from the pole position. Turner dropped back in the race, finished sixth and failed to transfer to the main event. Gentry started eighth in the first heat race, but rallied to finish fourth and transfer into the main event, earning the 13th starting spot.

Turner started fourth in the first 20-lap consolation race Saturday night, and failed to finish in one of the top three transfer spots. Turner took a provisional and started the main event from the 23rd starting spot. A lap-35 tire dimmed his title hopes. Meanwhile, Gentry charged up to third spot.

But things changed dramatically on lap 45. After restarting in third spot after a lap-42 caution flag, Gentry fell off the pace and dropped back to the sixth spot, and Turner moved up to 12th and took over the point lead from Gentry, who eventually stopped on lap 45 with a cut down left-front tire.

Gentry went to the pits, changed the tire, and restarted in the 18th spot. Gentry charged back through the field and ended up finishing seventh, but Turner’s 12th-place finish was enough to hold on while Gentry was series runner-up for the second straight season.