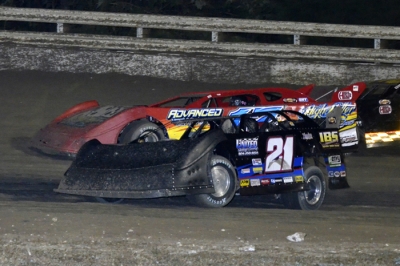 Don O’Neal of Martinsville, Ind., was sent to the pits after he retaliated following a lap-69 tangle with Mark Whitener of Middleburg, Fla., who took the checkers first but was disqualified several hours later for a piston violation in his crate engine. | Turner wins title | Prelims | Slideshow | Video

With Whitener’s disqualification, Shan Smith of Dade City, Fla., was moved up to second in the final rundown as the 21st-starting driver earned the Hedman Husler of the Race Award. Doug Horton of Bruceton, Mills., W.Va., 16th-starting Keith Nosbisch of Valrico, Fla., and Dennis Franklin of Gaffney, S.C., rounded out the top five. Mack McCarter of Sevierville, Tenn., was sixth, the final driver on the lead lap.

The polesitting Whitener and O’Neal mixed it up through most of the race with eight lead changes in a marathon race slowed by 12 cautions that lasted an hour and 45 minutes.

Whitener led from the outset with O’Neal moved into second by the 12th lap as the frtonrunners battled lapped traffic. Greg Martin briefly took second from O’Neal after a restart, but Martin’s race ended when he hit the turn-four wall on lap 23.

O’Neal grabbed the lead on lap 26 in turn two while 19th-starting Ronnie Johnson moved into the third spot.

Whitener regained the lead for laps 32-33 before O’Neal went back out front, and Johnson’s race was over a few laps later when he hit the wall exiting turn four.

Driving a Jim Beeman-owned car, O’Neal was in control over Whitener, Gentry, Horton and Nosbisch after 42 laps, but Gentry slowed with a flat tire on lap 45.

Whitener and O’Neal continued swapping the lead halfway through the race, and the frontrunners had a straightaway margin on the third-running Horton by lap 60. The frontrunners traded slide-job passes and O’Neal dove under Whitener to take the lead on lap 66.

Three laps later, Whitener tried to slide under O’Neal in turn two, but the cars came together with the combination of Whitener’s car pushing and O’Neal staying in the throttle. O’Neal got sideways and backed into the turn-two wall.

Twice during the ensuing caution, O’Neal ran into Whitener’s car to show his dissatisfaction, and officials sent O’Neal and his damaged car off the track.

Whitener led the rest of the and 75 laps in all to take the checkers, but it was all undone ealry Sunday morning when the second-finishing Lloyd was declared the winner.