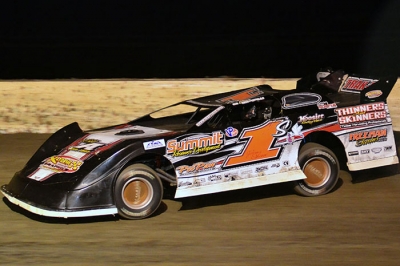 Jeremy Shaw was the $5,000 winner during Greenville's Gumbo Nationals. (photobyconnie.com)

GREENVILLE, Miss. (Oct. 6) — Jeremy Shaw of Millport, AL turned his 2012 season around Saturday by winning the sixth Annual Gumbo Nationals for the NeSmith Chevrolet Dirt Late Model Series at Greenville Speedway. Shaw led all 60 laps of the race to collect the $5,000 top prize.

Shaw held off a late race challenge from Tait Davenport of Benton, Ky., who caught Shaw in lapped traffic and challenged for the lead on lap 46 and lap 54. But Davenport suddenly fell off the pace on lap 55.

“I was pretty much committed to the top of the racetrack, and when we got to the lapped traffic, I tried to go to the bottom, but lost all of my momentum,” Shaw said. “I knew someone was there challenging me, but the cautions seemed to work in our advantage all night, and we kept clear race track in front of us.”

Turner holds a 16-point lead over Gentry in the NeSmith Chevrolet Dirt Late Model Series battle for the $20,000 championship going into the last race of the 2012 season, the 8th Annual Chevrolet Performance Parts World Championship Race on Nov. 30-Dec. 1 at Bubba Raceway Park in Ocala, Fla.

Gentry had a strong performance at the end of the race, but it was discovered during the postrace technical inspection that he was lucky to finish the race because two valve spring keepers and a rocker arm were loose.

“My engine wasn’t running on all eight cylinders from about the fifth lap to the end of the race,” Gentry said. “I ran 55 laps on seven or even six cylinders.”

Turner can clinch the title by finishing seventh or better in the finale.

“I can’t wait to get to the last race of the season and get this done,” Turner said. “We had a good run tonight and that’s something for us build on going into the final race. I know David Earl is going to make me earn it, as he has done all season.”