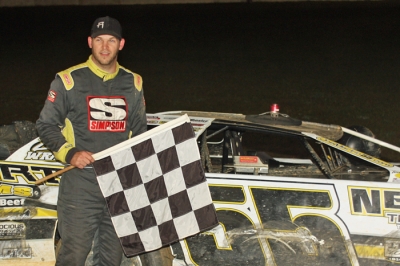 Martin, who earlier this season won the Gary Knollinger Memorial at Sharon Speedway, earned $2,000 in the race that ran as the undercard to the 3/8-mile oval’s Big Kahuna event for Three State Flyers Super Late Models. The 27-year-old driver was affected by handling issues briefly in the 30-lap race, but in the end was lucky to have the issues work in his favor.

"It's another big win," said Martin, who earned the fourth series victory of his career. "We found the handling problem after the dash in the pits and fixed it, but I think about lap five or six it broke again. I thought `oh man', but I was lucky the track transitioned a lot during that race. It slicked off and the problem was making me too tight, but it was slick enough that the car wasn't as bad as it was in the dash.”

Making his first series appearance since a fifth at Roaring Knob on April 20, Kyle Thomas of Pennsboro, W.Va., finished second to match his career-best series finish from 2010 when he recorded a pair of runner-ups at his home track Tyler County Speedway.

Nolan Dalton of Morgantown, W.Va., also matched his career-best series finish of third while Mike Pegher Jr. of Wexford, Pa., got around Josh Holtgraver of Pittsburgh, Pa., on the outside on the final lap to finish fourth.

In what's been a disappointing season for last year's third-place point man and two-time winner, Holtgraver dropped to fifth for the third time in the past five starts, matching his best finish of 2012.