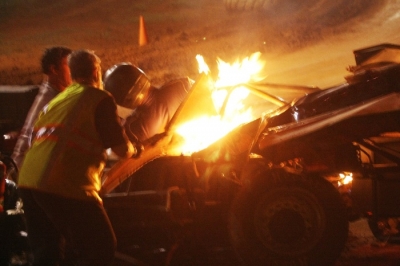 Furman Parton of Union Mills, N.C., finished second while David Smith of Inman, S.C., was third, good enough to wrap up the $10,000 series title, his second championship on the Crate Late Model tour. Zack Mitchell of Enoree, S.C., and Steve Banal of Troutman, N.C., rounded out the top five. | Slideshow

The race was marred by a Dale Timms-Michael Smith tangle that sent Smith’s car barrel-rolling before coming to a stop and igniting. Safety officials helped get Smith out of the fiery car and no one was injured. The race was red-flagged 35 minutes as a backhoe was used to repair damage to the wall in turn three.

Notes: Franklin’s Barry Wright Race Car is sponsored by Advance Electronic Services and AES Racing. ... The event drew 40 drivers from five states. ... Steve Hendren, son of the race’s namesake and winner of the first event last year, had Ricky Weeks drive his No. 29. Weeks spun in turn four with 16 laps remaining and retired in 20th place. ... Lee Cooper took a series provisional and had to drive a borrowed car in the main event. ... It was announced that the 2012 Fastrak World Championships on Oct. 4-6 at Beckley (W.Va.) Motorsports Park will be taped by Delmar Studios for later telecast on Fox Sports Networks.