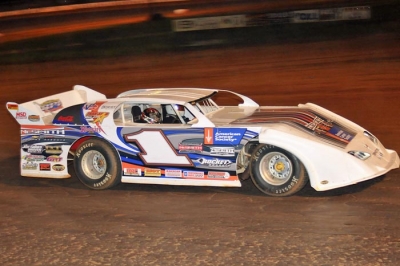 The Ride for Life two-seater takes a fan around Greenville Speedway. (series photo)

It was a record-breaking night at Greenville Speedway on July 21. A new record wasn’t set during the close racing action on the quarter-mile, black gumbo oval by the NeSmith Chevrolet Dirt Late Model Series or by hometown driver Greg Fore, who the night’s 75-lap Delta Dirt Nationals feature.

Instead it was the fans that set a record at the event as they donated more than $15,000 to the local chapter of the American Cancer Society through the Ride For Life fundraising program.

Throughout the event for NeSmith’s Crate Late Model tour, fans donated money for a chance to win a ride with Dirt Late Model drivers in the NeSmith Series’ Ride For Life two-seater race car and also through the purchase of raffle tickets and event t-shirts.

“We do a lot of fundraising events here in Greenville, but the Ride For Life Program at Greenville Speedway is the most successful thing we do that raises more money in one night that any other program,” Sides said. “We can’t thank the promoters, the fans, the racers and the NeSmith Chevrolet Dirt Late Model Series enough for what they all have done for us in setting a new proceeds record.”

The benefit was held around the Greenville’s Delta Dirt Nationals July 21 for the NeSmith Series. Throughout the event, race fans made bids for six-lap rides at race speed with one of six drivers while also purchasing raffle tickets for a chance to win a ride through a drawing.

The highest bidders won the six-lap rides at race speed sitting next to their respective driver. Other fans won one of three coolers filled with more than $1,000 worth of merchandise donated by local businesses.

NeSmith tour regular Johnny Stokes of Columbus, Miss., along with Greenville regulars Duke Palasini of Leland, Miss., Brent Barrett of Cleveland, Miss., Fore, Bubba Harrison of Cleveland, MS, and Mark Tice of Avon, Miss., donated their time and talent to give the rides to race fans.

“It’s wonderful that Washington County and the community of Greenville, Miss., have a race track like Greenville Speedway, track promoters like Wesley Washington and James Clolinger, an enthusiastic group of fans and drivers and especially American Cancer Society co-chairs Jana Sides and Kathy Gower that have all worked hard to give back to the community in such a big way,” said Roby Helm, the NeSmith Series’ president of operations and communications. “Greenville, Miss., can be proud that they have a race track like Greenville Speedway that each year gives back so generously to the community.”

This year’s event went far and above its goal in raising another record amount.

“The goal this year was to earn $10,000 with the Ride For Life program at Greenville Speedway,” Helm said. “When we arrived at the track on Friday, Jana Sides and Kathy Gower had already been busy for a couple of weeks, and had already raised $5,000. When we started the auction on Saturday night, they had collected $7,000. The auction blew the total way beyond the goal!

“Racetracks in other communities can use Greenville Speedway as a prime example of how they can give back to their communities,” Helm added. “The local American Cancer Society Chapters need people like Jana Sides and Kathy Gower to get out there and help make these programs successful. The doctors and scientists are the ones trying to find a cure for cancer, but the Ride For Life Program is a way people in racing can help them with the funding to do their work.”