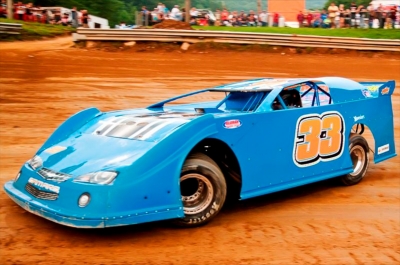 Chris Meadows tunes up before his July 21 victory at Thunder Mountain. (peepingdragonphotography.com)

HANOVER, W.Va. (July 21) — Chris Meadows of Crab Orchard, W.Va., once again defended his home turf against the invading travelers of the Fastrak City Chevrolet Tour Saturday at Thunder Mountain Speedway, earning $3,000 for his second victory of the season on the Crate Late Model tour. | Slideshow

Meadows, the home-state driver whose previous series victory came in Fastrak’s first visit to Thunder Mountain’s 4/10-mile oval in May, started from the pole of the 50-lap event and topped third-starting Matt Long of Concord, N.C., for the victory.

Saturday's race was slated to be the second leg of a doubleheader weekend for Fastrak at Thunder Mountain but Friday's $2,000-to-win event was rained out. The Fastrak Tour returns to action July 28 with a $2,000-to-win event at Toccoa (Ga.) Speedway.