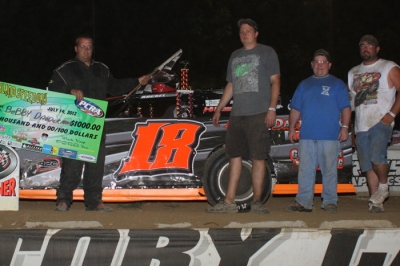 HIGHLAND, Ill. (July 14) — Polesitter Bobby Dauderman of Alhambra, Ill., led all but the first lap Saturday at Highland Speedway for a victory on the Pro Crate Racers of America circuit.

Michael Kloos of Trenton, Ill., got the jump on Dauderman at the outset, but he went ahead on lap two in a 25-lapper where the field ran three-wide throughout. Rick Salter dropped Kloos to second on the 17th lap but settled for the runner-up spot while Kloos was third. John Cory and Clay Baumann rounded out the top five finishers.

Two cautions on the race. Billy Knebele Jr. got spun around with some help on lap 15, and Tom Carson’s spin two laps later brought out another yellow.