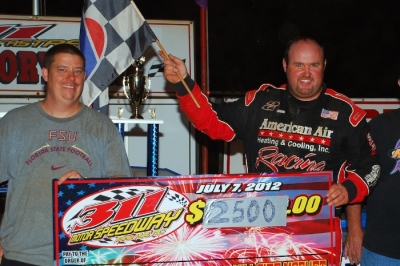 The event, originally scheduled as a $5,000-to-win, 100-lapper, saw its purse and laps cut in half because of a low car and fan count on a blistering hot weekend with temperatures over 100 degrees both nights.

G.R. Smith of Mooresville, N.C., finished second with Dan Breuer of Troutman, N.C., in third ahead of Tony Hicks and Justin Hudspeth. Fast qualifier Steve Hendren’s car had rear-end problems in Saturday’s hot laps and was the first car out of the 16-car feature field.

Notes: Franklin’s AES Racing Barry Wright Race Car is sponsored by Advance Electronic Service. ... The event drew 22 cars on Friday night, but a few loaded up after the likely purse cut was announced. ... Walker Arthur’s weekend ended when he tangled with another car trying to exit the track in hot laps on Friday. ... Officials considered a halfway break to the 50-lapper with a chance for teams to make changes, and an inversion of the running order, but drivers balked. ... Carburetor issues plagued Winky McGee; he finished 15th in the 16-car field. ... G.R. Smith was coming off a weekly victory at 311 the previous Saturday.