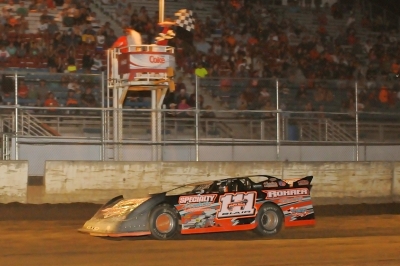 The series points leader won the second round of the five-night Original Pizza Logs Cross the Borders Speedweek for a $1,200 victory in the Cpl. Jason Dunham Memorial. | Slideshow

Blair held off a late charge from Dan Angelicchio of Greensburg, Pa., in setting a single-season record with his sixth victory of the season on the Crate Late Model tour. Mike Pegher Jr. held the previous record at five victories.

"We haven't gotten a whole lot of sleep the last few nights," explained the 22-year-old Blair, who has suffered back-to-back blown motors at Eldora (Saturday) and Expo (Wednesday) Speedways. "We've literally slept five hours in the last week. When the motor blew at Eldora it put me in the fence. It's been a long week and I'm really hoping I didn't hurt another one tonight. We really needed this to keep us going through the rest of Speedweek.”

Angelicchio settled for second with John Lacki third in his first tour start of 2012. Ryan Montgomery, 15, and Chad Wright rounded out the top five while Wylie was part of a lap-14 incident and finished 22nd.

The event’s 49-car field was the highest of the season and second to only Tyler County Speedway's 53 cars on April 17, 2010.

The series heads to Raceway 7 in Conneaut, Ohio, on Friday for the third of five Speedweek events.