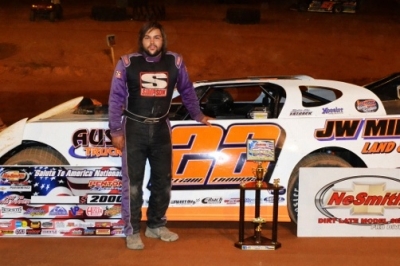 PENTON, Ala. (July 5) — William Thomas of Phenix City, Ala., is halfway home to a $1,000 bonus after winning his second straight NeSmith Chevrolet Dirt Late Model Series event during the four-race Salute To America Nationals. Thomas led flag-to-flag Thursday at Penton Raceway in J.W. Miller Land and Timber Special for a $2,000 victory. | Video

It was the second straight sweep for Thomas, Wednesday’s winner at East Alabama Motor Speedway, as he topped 29 entrants in time trials to earn the pole position for the main event. The Penton victory wasn’t uneventful for Thomas, however, as he crashed with lapped car on lap 23, and then had to hold off a late race challenge from Tod Darda of LaGrange, Ga.

“I’m thankful that we were able to continue after getting into the lapped car,” Thomas said. “Last night the lapped cars gave me room to get by, but tonight, they were really in the way. Tomorrow night, I might have to move them out of the way. I do want to thank Tod Darda because I knew he was there at the end of the race and he raced me clean.”

Darda settled for second, barely a quarter-second behind Thomas at the checkered flag. Chase Edge of Lafayette, Ala., notched his second straight third-place finish while series points leader Matthew Turner of Dawsonville, Ga., was fourth. Rookie Chris Cantrell of Chester, S.C., rounded out the top five.

The key moment in the race came on lap 24 when Thomas tried to work to the inside of the slower car of Adam Gauldin of Talladega, Ala. in turn four, but Gauldin spun and collected Thomas. The caution was charged to Gauldin, and Thomas was able to reassume the point.

During the caution period, series and track officials looked over the damaged right-front corner of leader’s race car and deemed it safe enough to continue. Thomas kept Darda in check the rest of the way for the victory.

Thomas will go for his third straight series victory Friday at Penton for another $2,000-to-win event. The four-race stretch wraps up Saturday at Albany (Ga.) Motor Speedway for a $2,500-to-win race.