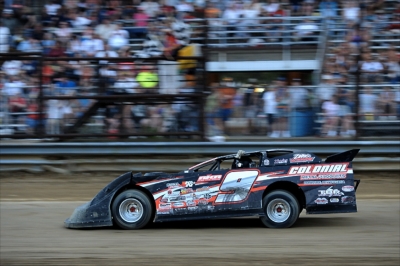 Will Thomas III takes the checkers at Expo Speedway. (jmsprophoto.com)

Thomas earned $2,000 for capturing the opener of the five-night Original Pizza Logs Cross the Borders Speedweek during the 166th annual Trumbull County Fair.

“I tried to tell Max under caution it was smoking,” Thomas said after winning the 25-lapper. ”I didn’t want him to lose one, but it’s great to win. I have to thank my dad, my wife, all of my crew guys. Russ King was last year’s winner and it didn’t hurt having him help.”

In a race where the field was shuffled with a series of lap-19 yellows, Matt Long of Concord, N.C., finished second followed by Butch Lambert of Valenicia, Pa., who was running 14th before the late caution. Polesitter Joe Martin of Ringgold., Pa., rebounded from a late pit stop to finish fourth with John Over of Union, Pa., rounding out the top five. Blair, who led the first 19 laps, finished 12th.

The 30-car turnout was a record for the midweek event at the 5/8-mile oval, which has to start at 6 p.m. because there are no track lights.

Notes: Thomas drives a Rocket Chassis sponsored by Colonial Metals, Barris Supply, All Star Motorstate, Sweet Mfg., and Quarter Master. ... He’s the 31st series winner in 82 races. ... Mike Pegher Jr. received the Tough Brake of the Night when he broke a wheel on the ninth lap. ... Cautions after 19 laps were scored were for a slowing Steve Dixon, a Shane Bambarger-Matt Latta incident, and finally a seven-car tangle mid-pack. ... Dan Angelicchio gave up third spot during one of the cautions. ... Colton Flinner’s sixth-place finish was his best in eight series starts. ... Drivers failing to make the feature lineup: Shane Weaver, Bob Diver, Robby Barris, Mark Moats and Tom Copeland. ... The Speedweek continues Thursday at McKean County Raceway in East Smethport, Pa., for a $1,200-to-win event, the second of five races.