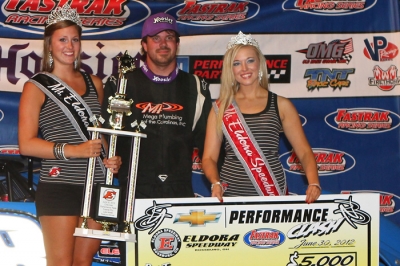 Jonathan Davenport won at Eldora in the AES Racing No. 38. (www.alisonwilliamsphotos.com)

“We try to run with Fastrak when we get the chance. I don’t get a lot of chances to do it anymore but it sure was neat to be able to come back to this place and get this win," Davenport said. "It’s so hard to get laps here at Eldora that it pays to try and race here every chance you get. Hopefully we can take some of what we learned tonight and apply it when we come back here for the World 100 later this year.”

It took a pair of starts to get the 40-lapper under way, but once the field sorted themselves out, it was Davenport out in front with a comfortable lead. By the fifth circuit, Davenport built himself a 12-length lead while the action behind him was hot and heavy.

Cooley was busy holding off Brian Connor for runner-up honors in the early stages, as Ruhlman was working his way through the field. Ruhlman passed two cars on the seventh lap to move into fourth place behind Davenport, Cooley and Connor.

A lap-13 caution flag bunched the field one more time, but the results were the same on the restart as Davenport jumped into the lead over Cooley. Ruhlman used the restart to move into third spot while Max Blair moved into fifth behind Connor.

Blair’s charge to the front ended on lap 37 as he tagged the turn-one wall, drawing a caution and setting up a three-lap shootout to the checkers. Davenport and Cooley maintained their mastery of the field on the restart, with a hard-charging Schiltz grabbing third and Ruhlman slipping to fifth at the finish behind Robertson.

“I can’t say enough about these guys that work on this car," Davenport said. "I didn’t get here until late this afternoon and they had it ready for me. All I had to do was get in and drive it. It was just a great car."