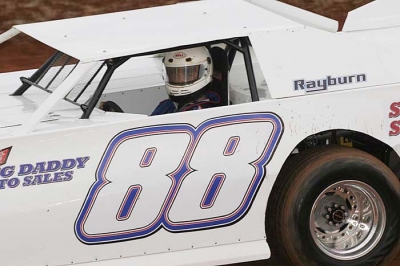 Today, P.J. and his father Paul have returned to racing in winning form. At the 2008 Ponderosa Speedway opener, the duo timed in first and second in the Crate Late Model division, took the top two spots in the heat and completed the night going one-two in the main event.

For long-time fans of Ponderosa, the name Feistritzer is a common one. Since the wedge-car days of the early '80s, Paul “Big Daddy” Feistritzer has won more races than he can remember. Five years ago, fans got to see Feistritzer's son make his debut. In 2007, the youngster put the family name back in the track’s record books by winning 17 features and claiming Ponderosa's Crate Late Model championship. In the process, the elder Feistritzer climbed back behind the wheel.

“P.J. got too smart and was winning too much, so I decided to do it again," said the 60-year-old Paul. “There’s not a nickel’s difference in our cars and we still do the same stuff now we did when I raced Late Models. You just want these cars looser because you don’t have the motor they do. I let him make his decisions about what to do, but he knows where to go when he’s in a little trouble.”

How do they stack up on the racetrack?

“You don’t want to lose to anybody, but especially to somebody you have to see all week," P.J. said with a laugh. “I think we give each other plenty of room and watch out for each other. If we get together, then we have two cars to fix.”

Said Paul: “He’s really good here. I can beat him at Richmond, but unless he messes up (at Ponderosa), then he’s going to win.”

For the younger Feistritzer, Crate racing is a fun way to race while keeping expenses in check. “With the costs of these cars you can race more like a hobby," he said. “With Late Models, you’ve got so much money tied up that you’re almost obligated to go race. With this, if we want to take a night off, we can and it’s not a big deal."