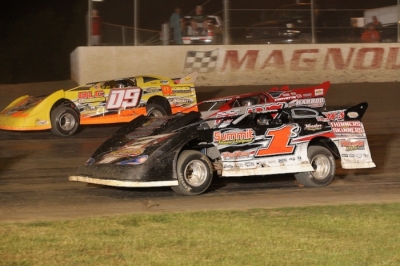 Jeremy Shaw (1s) crossed the line second but was elevated to the top spot. (foto-1.net)

Cooley, the Fulton, Miss., driver who led the final 28 laps of the Crate Late Model race, was disqualified when one of the tires he used in the event was determined to have contain an unapproved chemical presence.

The 11th-starting Shaw made what turned out to be the winning pass on a lap 15 restart when he went to the outside groove and roared from seventh to second by the time he reached the backstretch in his Summit Resource Development Trak-Star. The win was the second of his career on the NeSmith tour.

McRee, who was looking for a sweep of the tour’s Mississippi doubleheader weekend after winning Saturday at Whynot Motorsports Park, took the lead from the pole, but soon had a challenger in fellow front-row-starting Cooly. McRee was riding the cushion on the high side of the track, while Cooley found a fast groove on the bottom.

McRee and Cooley raced side-by-side on laps two and three, and had pulled out to a half straightaway lead over rest of the field by lap five. Cooley powered under McRee coming off the fourth turn on lap 12 to take the lead.

Shaw drove from his 11th starting spot to seventh in the first 12 laps of the race. He used a lap-14 restart to sail around the outside of the track and jump from seventh to second in what proved to be the race’s deciding moment.

Shaw's victory came on the same night Randy Weaver of Crossville, Tenn., earned $5,000 at Magnolia for a Southern All Star Series victory.

The next two events for the NeSmith Chevrolet Dirt Late Model Series Touring Division will be at Boyd’s Speedway in Ringgold, Ga., for a $2,000-to-win June 1 and 411 Motor Speedway in Seymour, Tenn., June 2 for the $4,000-to-win J.T. Kerr Memorial 40.