Walston gets PCRA victory at Clarksville 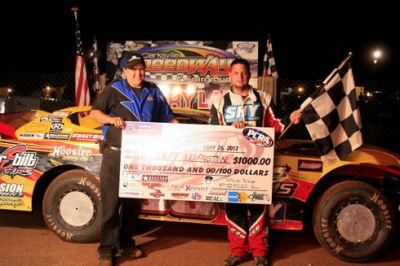 CLARKSVILLE, Tenn. (May 26) — Ending a streak of two straight runner-up finishes, outside front-row starter Jeff Walston of Paducah, Ky., earned $1,000 on Saturday at Clarksville Speedway with his first victory on the Illinois-based Pro Crate Racers of America tour.

Walston survived a late scare with a lapped car that brought out a yellow flag to set up a green-white-checkered flag finish at the quarter-mile oval.

Among cautions were a lap-12 yellow for Evan Taylor and Kyle McMahon. The race was slowed on lap 24 for Travis Morgan.

Notes: Walston’s MasterSbilt Race Car is sponsored by SHY Racing Suspension, Mason’s Recycling, Tiffany’s on Broadway and New Vision Graphics. ... Evan Taylor of Woodlawn, Tenn., was quickest on the clock, but he lost his fast qualifying time to Bobby Dauderman when he failed to cross the infield scales. ... The race was a makeup of a May 12 rainout. ... Jason Suhre was the Allstar Performance Hard Charger with his 21st-to-14th run.