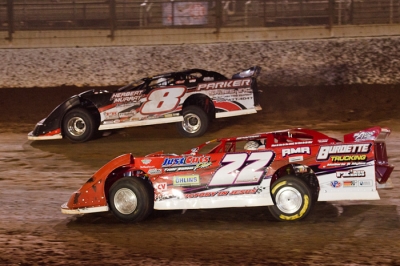 Ron Parker of Belwood, N.C., led for most of the 25-lapper after taking the lead away from Ferguson. The two battled side-by-side and Ferguson regained the lead with five laps remaining en route to the victory. | Slideshow

“I can't say enough about my crew. There's not one over here that's over the age of 21 on my crew tonight,” said the 22-year-old Ferguson. "Us young guys really (caught) up tonight and ran with the old guys,” said Ferguson. “We've (run) in about five or six races this year and we should've won five or six of them, but we only won one. It feels good to get this one.”

The race was marred by two cautions and a red flag on lap two, which resulted from a crash involving Brad Smith barrel rolling down the frontstretch. No injuries were reported.