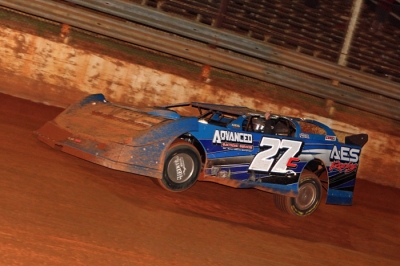 RICHBURG, S.C. (May 12) — Starting from the outside of the second row following a four-car invert, fast qualifier Dennis Franklin of Gaffney, S.C., made his way to the front for a $2,000 victory in Saturday’s NDRA Road Show event at I-77 Speedway.

Franklin, who faded back a few spots early in the 40-lap race, rebounded to overtake Timbo Mangum of Lancaster, S.C., for the top spot on lap 12 and led the remaining distance in his Steve Cooke-owned Barry Wright Race Car.

"I got shuffled back to fifth or sixth one time, but we were fortunately able to come back and win it," Franklin said. "We came here with our A-game, set fast time and then came through the field. It was a really good night for us."

Jeff Smith of Dallas, N.C., advanced to second after starting seventh in a 26-car field, but his car wasn't up to par on restarts. He was unable to seriously challenge Franklin and settled for the runner-up finish at the 4/10-mile oval.

Mangum was third at the finish with Anthony Sanders of Spartanburg, S.C., finishing fourth after briefly taking the lead early in the race. Second-starting Corey Gordon of Charlotte, N.C., rallied to finish fifth after getting caught in an early caution.

The race was slowed by 13 cautions, including a backstretch flip by early-contender Ron Parker of Bellwood, N.C. The fifth-starting Parker was battling Mangum for the lead early in the race when contact between the two drivers caused Parker to clip the concrete barriers, sending his machine into a slow rollover.

Mangum was able to continue as the leader following the accident, but Anthony Sanders emerged as the new leader soon after the restart. A multicar crash slowed the field, and Mangum returned to the front shortly thereafter on the race's fourth restart. He held the front position through lap 12, but Franklin was able to use the low groove to sneak underneath him between turns one and two.