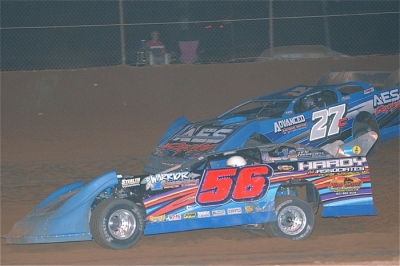 Gentry utilized the bottom groove of the quarter-mile clay oval to his advantage in his Eads Farms and Hardy & Associates-sponsored Warrior Race Car. After tracking down Franklin of Gaffney, S.C., Gentry made the winning pass following a restart, diving under Franklin entering turn one and completing the pass exiting turn two.

“Last night the track was hooked up around the top, but I watched the track prep all day, and it looked like the bottom groove was going to come in tonight,” Gentry said. “We made some adjustments to make our car work down there with the Bilstein Spec Shocks and that made a big difference.”

Defending series champion Dan Breuer of Troutman, N.C., also overtook Franklin, his AES Racing Team teammate, to claim the runner-up finish. After riding the first half of the race on the high side of the track, Breuer mirrored Gentry’s act on the inside, dropped down behind him, and followed him up to the second.

“We thought the track would be the same as it was last night, so we drove around the top,” Breuer said. “But when Gentry went blasting by me on the bottom, I just tucked in behind him, and followed him to the second spot. We had a harder compound tire on, so we were good on long runs. The late race caution flags did us in at having a chance to challenge for the win.”

The NeSmith Series for Crate Late Models returns to action May 4-5 with a doubleheader weekend. Friday’s event at Malden (Mo.) Speedway pays $2,000 to the winner, while Saturday’s visit to Clayhill Motorsports Park in Atwood, Tenn., pays $2,500.