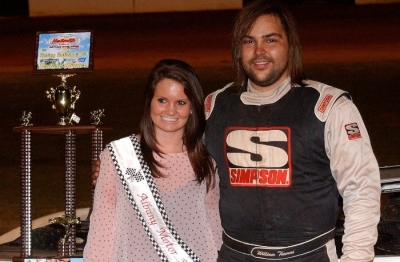 ALBANY, Ga. (April 27) — William Thomas only led 200 feet of Friday night’s NeSmith Chevrolet Dirt Late Model Series Spring Nationals 40 at Albany Motor Speedway, but it was the most important 200 feet of the race.

Thomas of Phenix City, Ala., capitalized on heavy lapped traffic at the quarter-mile oval to move by race-long leader Jake Teague of Oliver Springs, Tenn., exiting turn four on the final lap. Thomas earned $2,000 in his L.W. Miller Land and Timber-sponsored race car for his eighth career victory on the Crate Late Model tour.

Teague led for 39.7 laps in his Wade’s Body Shop ride, but settled for second-place and the VP Racing Fuels Rookie of the Race Award in the event, which kicked off a weekend doubleheader for the tour at the south Georgia racetrack.

Teague went to the bottom of the track to try and clear the lapped car of Thomas Lewis of Hamilton, Ga., on the final lap, and that opened door for Thomas. Teague tried to move back to the high side exiting the final corner, but Thomas was there. The top two cars made contact, but Thomas had a run and beat Teague to the checkered flag by .246 seconds.

“When Teague looked to the inside to try and get around the lapped car, that gave me my only chance to by him coming off the high side of turn four on the last lap,” Thomas said. “When we came off the corner, I was coming back down from the high side, Teague was coming up from the inside, and I beat him to the flag.”

Although he was disappointed not to get the win, Teague felt fortunate to have performed as well as he did after his race car developed mechanical issues midway through the race.

“During one of the caution flags, William pulled up alongside me, and I kept waiting for him to drive by because my engine fell off the pace halfway through the race,” Teague said. “As long as I was running the high side, I could stay up front, but when I went to the bottom to pass the lapped car, I just didn’t have what I needed to get off the corner. We’ll change engines and be ready to go again for tomorrow night’s race.”

The 2011 VP Racing Fuels Rookie of the Year Chase Edge of Lafayette, Ala., finished third after starting the evening by setting fast time among the 31 entrants with a lap of 14.357 seconds. Larry Harrod of Plains, Ga., was fourth with Matthew Turner of Dawsonville, Ga., rounding out the top five.

The race was slowed by four cautions. Debris slowed the race for the first time on lap 14, while a Thomas Lewis of Hamilton, Ga., and Kitt Sealy of Moultrie, Ga., tangled to bring out the second caution on lap 18. Sealy brought out another caution when his car stalled on lap 27 to bring out the third caution, and Kelly Walker of Moultrie, Ga., spun to cause the final caution on lap 30.