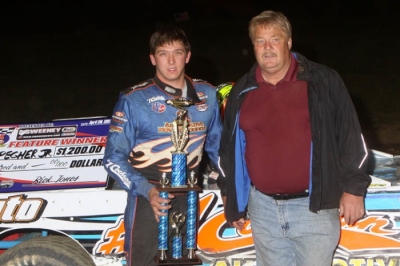 Pegher overtook Justin Tatlow and cruised over the final 21 non-stop laps for his 15th series victory, breaking a tie with Max Blair as the tour’s winningest driver.

"The track was awesome," said the 26-year-old Pegher, who earned $1,200. "It was smooth and you could run on the outside and inside. We really like this track and hope to come back here soon. The car was just perfect.

"Justin was really good on the bottom. I knew if I couldn't get by him on a restart it was going to be tough to get him on the inside. Anytime you can come back from a crash and win it's a huge deal. I have to thank everyone that helps me.”

Tatlow, making just his 11th career start on the series, finished second for as the Franklinville, N.Y., driver recorded his best series finish. Blair was third with Butch Lambert and Kyle Thomas rounding out the top five. Josh Holtgraver, racing for the first time since suffering leg fractures, was sixth.

Notes: Pegher’s Lynn Geisler-owned Rocket Chassis is sponsored by #1 Cochran, Triple-S Auto Outlet, Alternative Power Sources and Zero Wraps. ... The race was on the undercard of Scott Bloomquist’s Lucas Oil Late Model Dirt Series victory. ... Billy Stile III lost a top-five spot when he got into the wall exiting turn four early in the race. ... Series points leader Max Blair was awarded the $100 Genesis Shocks Top Dog of the Night award. ... George Kowatic crossed the line first in the third heat, but failed to go to the scales; he rallied from the tail of a consolation race to win and finished eighth in the main event. ... Coming from the 22nd starting spot, Kowatic took Precise Racing Products Pedal Down Hard Charger honors. ... Next up for Fastrak Northeast competitors is an April 27 event at Dog Hollow Speedway in Strongstown, Pa.