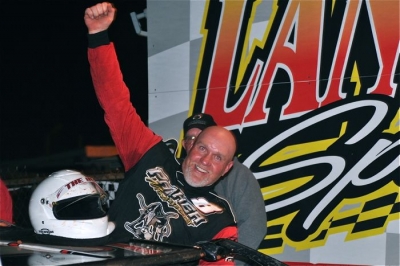 Parker, who won 23 NDRA-sanctioned events last season on his way to earning the organization’s weekly and touring series titles, led the entire distance of the 30-lapper, fending off multiple challenges from Dennis Franklin of Gaffney, S.C., on his way to winning in front of a large crowd at the half-mile oval.

Franklin pulled alongside Parker a number of times throughout the race with the two racing side-by-side for a number of laps. But Franklin faded in the closing laps, allowing Dan Breuer of Troutman, N.C., to overtake him in a close finish for the runner-up position.

With his victory, Parker took over the points lead on the NDRA tour, which is slated to compete again until a $3,000-to-win event Oct. 21 at Carolina Speedway in Gastonia, N.C.

Among the race’s cautions was a scary incident for hometown driver Brandy Baker, whose car went up in flames. Track safety crews extinguished the fire without any injuries.