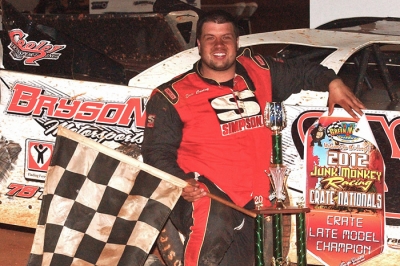 Cooley held off a late-race charge from Chris Wilson, who used a lap-42 restart to pick up three spots in reaching second place. Wilson ducked underneath Cooley a couple of times in the closing stages, but settled for a runner-up finish over Compton, Jake Teague and Chase Edge.

"I'm speechless to be honest with you," Cooley said. "This is my first big win, and to be driving Norm's car and have him here tonight watching is just a really great deal. He's helped me out for a couple of years, and it's just awesome to be able to get this win for him."

While Compton paced the first 28 circuits, Cooley tracked him closely. He tried the low groove repeatedly, and twice used the high side to make his presence known. As the two leaders approached T.J. Alford's slower machine on the backstretch, Cooley matched Compton's efforts in a drag race down the backstretch, using Alford's car to trap the leader and complete the pass exiting turn four on lap 29.

"I knew (Cooley) was better than us tonight," Compton said. "I was trying my best to hold him off and we had a decent lead at one point, but he kept inching up there and getting closer, so I figured he was gonna run me back down. I could see his nose under me, and he just drove on by me."

Wilson, who took over the second spot when Compton jumped the cushion, tried the low side in the latter stages to unseat Cooley, but couldn't make it work.

"I think we were a little better on the bottom, but (Cooley) could roll the top a lot faster than we could," Wilson said.

Phenix City, Ala., driver William Thomas charged toward the leaders again after a brush with a lapped car sent him off the backstretch with approximately 10 laps to go, and was battling with Chase Edge for the fourth spot with three laps remaining when he lost traction while running underneath the Lafayette, Ala., driver. The back end of Thomas' machine danced around and the two cars made contact in turn two, spinning Thomas out and leaving him with a 15th-place finish.