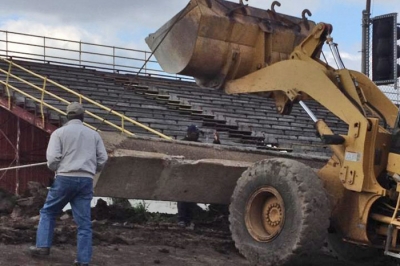 The installation of a concrete wall at Greenville Speedway.

It’s time for the NeSmith Chevrolet Dirt Late Model Series to head for Greenville (Miss.) Speedway for the $5,000-to-win Rumble On The Gumbo 75 with practice Thursday, time trials and heat races Friday, and finally consolation races and the feature Saturday.

The winds of change will be in the air, as drivers will face a different quarter-mile black gumbo clay oval, and there will be wholesale changes in point standings for the Crate Late Model series after the checkered flag falls on the third annual event.

All the racers will face a different racetrack in Greenville's season opener. The track now has concrete retaining walls at both ends of the race track in the corners, and the backstretch has been widened out to give the track a reconfigured D-shape.

With the Rumble On The Gumbo 75 the first post-Florida Speedweeks event, several drivers at the top of the point standings won't be making the trip to the Mississippi Delta, opening up the chase for the championship. That includes points leader Dennis Franklin of Gaffney, S.C., a two-time winner at Tampa's East Bay Raceway Park.

It appears that six of the top 10 drivers after East Bay won't chase the $20,000 NeSmith Cup. The Rumble On The Gumbo 75 will set the table for the 2012 Championship run.

Matthew Turner of Dawsonville, Ga., sits third in series points, and he wouldn't miss a run at his favorite track on the tour schedule. Turner has two career NeSmith tour wins, both at Greenville. This weekend will mark Turner’s 128th consecutive series race as he's competed in every NeSmith Chevrolet event held since the series inception in 2005.

Good fortune has been smiling on Turner so far in 2012. He recently learned that he and his wife Brandi are expecting their second child and the couple learned this week that the new bumble of joy will be a boy. Baby needs new shoes, and a $20,000 Championship check will buy a lot of shoes!

Even though Turner is in position to take over the points lead, there are capable drivers behind him. Two-time series champ David Gentry of Murfreesboro, Tenn., is just 14 points behind Turner in the standings, and Greenville Speedway has also been good to Gentry in the past.

Gentry took a Greenville victory last season on his way to a a runner-up finish in series points behind Dan Breuer.

Other drivers expected at Greenville Speedway looking to improve in the point are Mark Tice of Avon, Miss.; Chris Cantrell of Chester, S.C.; Johnny Stokes of Columbus, Miss.; Chase Edge of Lafayette, Ala.; Shannon Lee of Lumberton, Miss.; and Anthony White of Clinton, Tenn.

Action at Greenville begins with Thursday's practice. Gates open at 5 p.m. with practice from 7-10 p.m.

On Friday, gates open at 4 p.m. with registration and inspection through 7:15 p.m. for the pre-race meeting. Action is scheduled for 7:30 p.m. with time trials and heat races to follow.

On Saturday, gates open at 3 p.m. with the pre-race meeting at 6:45 p.m. and racing at 7 p.m. Consolation races and the 75-lap main event will follow.

For more information about Greenville Speedway, call (622) 822-7071 or visit at www.greenvillespeedway.net.