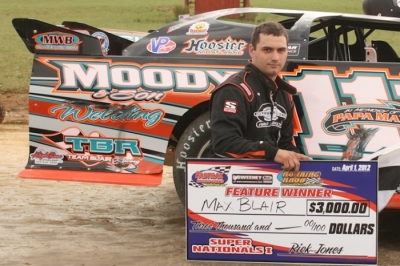 The 22-year-old Blair led all but the first lap of the 40-lap Super Nationals main event for a $3,000 victory in a two-day event that drew 47 entries on a weekend where rain frequently threatened. Blair beat sixth-starting Sammy Stile of Charleroi, Pa., and David Scott of Garland, Pa., to the checkered flag, along with beating approaching rain.

"It means a lot to win at Roaring Knob as we've really struggled here over the years," Blair said. "I just kept looking at the scoreboard and counting down the laps. I knew Sammy and David were back there, and the restarts were a tough deal, but I just had to stay on the bottom."

Polesitter Wayne Robertson led the first lap followed by Blair, Stile and fast qualifier Mike Pegher Jr., who started eighth. Blair made what turned out to be the winning pass on the second lap, driving to the inside of Robertson in turn two and going on to enter lapped traffic by the 12th lap.

After Joe Moyer's lap-13 spin drew a caution, Blair restarted out front while Stile took second from Robinson. Justin Tatlow slammed the fence for a lap-14 yellow, and George Kowatic came alive to grab the third spot shortly after the restart.

With Blair leading Stile, Scott edged back past Kowatic to take third on lap 21, and Robertson dropped Kowatic to fifth a lap later.

A lap-22 caution for John Flinner slowed the action and Scott took second from Stile on the restart. With 15 laps remaining, Blair, Scott, Stile, and Robertson distanced themselves from the field. Scott began to close in on Blair on lap 27 and appeared to have a shot to overtake the leader; however, a spin by Billy Stile III with 31 laps scored ruined his chance.

Two more cautions would slow action over the final nine laps as Stile and Scott swapped second three more time. Their battles allowed Blair to go unchallenged to the checkers.

Notes: Blair's Rocket Chassis is sponsored by Specialty Products, Rohrer Racing, Moody & Son Welding and Genesis Shocks. ... Blair's 13th Fastrak Northeast victory ties Mike Pegher Jr. at the top of the all-time list, but it was his first in nine months. ... The 47 entries were from five states and Canada. ... Doug Horton of High Gear Speed Shop helped collect about $1,600 on bonuses for the weekend from contributing sponsors. ... Fast qualifier Mike Pegher Jr. picked up $500 for quick time. ... John Flinner drove the No. 00 normally driven by Josh Holtgraver, who is recovering from two leg fractures. ... Next up for Fastrak Northeast is another event at Roaring Knob on April 20 paying $1,200 to the winner; that race is on the undercard of the Lucas Oil Late Model Dirt Series.