Bray threads needle for $5,000 at Toccoa 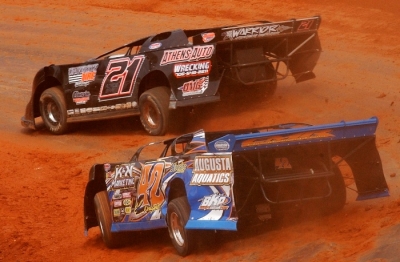 TOCCOA, Ga. (March 10-11) — Royce Bray of Hull, Ga., made a daring three-wide move amid traffic Sunday afternoon at Toccoa Speedway to take the lead and the victory at the Georgia Winter Nationals for Crate Late Models. Bray led the final dozen laps or so at the renovated facility for a $5,000 victory. | Video

“I had on a different tire compound, I’m sure, than most people did here, and I was trying to protect my tires,” said the 42-year-old Bray, who settled into fourth spot early, took third on lap 10 and eventually up to second behind Knight. “But I knew I had a fast race car.”

The key moment of the race came after lap 45 or so as the leaders battled behind the slower car of Jimmy Ivester. When Knight moved outside Ivester down the frontstretch, he left enough room for Bray to squeeze in between.

The cars were three-wide entering turn one with the cars of Knight and Bray bumping together. Bray shot between the other two cars and took control. A restart with seven laps remaining bunched the field and Bray closed out the victory.

“They had an opening there, and the track was tight and you couldn’t pass,” Bray said. “So I tried him a couple of times, and I didn’t want to rub him. So when it opened up, I had to go. It was time to go.”

Knight, who gave Bray a few love taps before the final restart, wasn’t pleased with the contact that came with Bray’s winning pass.

“I always try to race everybody clean, and I see how I’m going to have to race him from now on,” the 16-year-old said. “So he can expect a little payback next time I’m around him.”