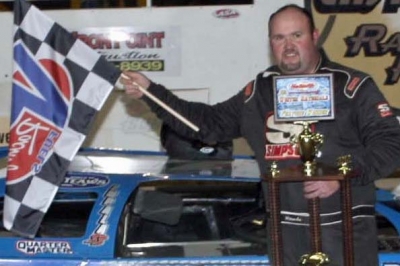 After finishing second in the previous two series races at East Bay Raceway Park, one in December and one the previous night, Franklin turned in a dominating performance by taking a 1.611 second margin of victory at the checkered flag over two-time series champ David Gentry of Murfreesboro, Tenn.

Franklin took the lead from Gentry on a lap-nine restart, and then led the rest of the way without a challenge for the point. After having carburetor issues the night before, but still finishing second on Thursday night, Rambo had smooth sailing 24 hours later.

“My crew found the problem we had with the carburetor last night, and the car really came to life tonight,” Franklin said. “I could drive the car where ever I needed to getting through lapped traffic. It feels good to finally make to victory lane here and I want to thank the fans for coming out tonight.”

Gentry turned in his best career performance at East Bay with his second-place finish while conducting R&D work in using the new $150 Bilstein Spec Shocks.

Gentry was the fast qualifier among the 50 entrants with a lap around the 1/3-mile clay oval in 15.627 seconds, and he earned the pole position for the race by winning the first of four 12-lap heat races.

Franklin’s AES Racing teammate Austin Hubbard of Sanford, Del., finished third and the Super Late Model regular was impressed with the competition and the power provided by the $5,000 GM Performance 604 Crate Engine.

“I raced with Rambo in the Carolinas early in my career when I was about 13-years-old, and I’ve read a lot about David Earl Gentry," said Hubbard, making his first career Crate Late Model starts. "They’re tough competitors and I’m glad that AES Racing gave me the opportunity to race with them down here."

Notes: Anthony White of Clinton, Tenn., started 22nd in the J.T. Kerr Racing Equipment Stinger and finished 10th to earn the Hedman Husler Award and a $100 bonus. ... Four cautions slowed the action, including for a spin by William Thomas on the ninth lap. ... Devin Dixon was battling in the top five early but slowed after contact in his battle with Hubbard and Gentry, dropping out on the 19th lap. ... Chris Cantrell, Thursday's third-place finish, spun out of the eighth spot on lap 21. ... Jake Teague spun for a lap-22 yellow. ... Twenty of 24 starters were running at the finish, 17 on the lead lap. ... The NeSmith Chevrolet Dirt Late Model Series Tour returns to East Bay for its third and final race of their portion of the 36th annual Winternationals on Saturday night with a 50-lap, $3,000-to-win race.