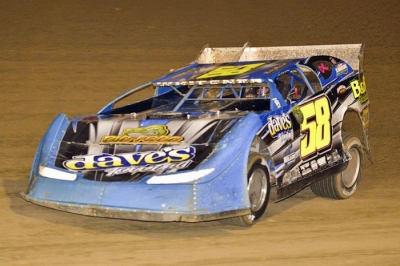 Whitener drove the Dave’s Towing Special to victory in the first heat race on Friday night to earn the pole position for Saturday night’s 100-lapper. Dixon won the second heat race in the Mathis Farms Special to take the outside front row starting spot for the main event.

Dennis “Rambo” Franklin of Gaffney, S.C., won the third heat race in the AES Racing Special to earn the inside second row starting spot, and Rodney Wing of Meridian, Miss., won the fourth heat race and will start the Buddy’s Home Furnishings Rocket on the outside of the second row for the big show.

The fifth heat race was won by Royce Bray of Hull, Ga., in the Junk Monkey Recycling Warrior to earn the inside third row starting spot for the $10,000-to-win race, and Brandon Overton of Appling, Ga., earned the outside third row starting spot for Saturday night’s main event with a win in the sixth heat race on Friday night driving the Budweiser Rocket.

Jonathan Davenport of Blairsville, Ga., set fast time among the 53 entrants with a lap around the third-mile clay oval in 15.758 seconds driving the AES Racing Special. Davenport finished second in the first heat race.

Drivers that finished fourth on back in the six 15-lap heat races on Friday will have another opportunity to make the big show on Saturday night in one of two 20-lap consolation races.