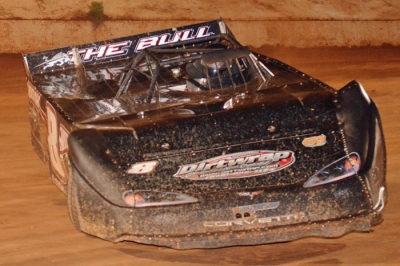 With the racing season lasting nearly year-round these days, it’s not unusual for drivers to go through multiple periods of highs and lows throughout the year. Even the sport’s best drivers have been known to experience a slump or two in a single season.

But for Belwood, N.C., Crate Late Model racer Ron Parker, the 2011 season was a rare example of a driver consistency performing at high level throughout the entire year. With a winning percentage better than 50 percent, Parker’s 2011 campaign was nothing short of dominant. He claimed 23 feature wins in 39 events sanctioned by the National Dirt Racing Association on his way to pulling off a clean sweep of the North Carolina-based sanctioning body’s touring and weekly racing series championships,

Parker won handily in both the $3,000 Heintz Performance Road Show title chase and the $5,000 City Chevrolet League Championship Series. He capped the NDRA season by winning $6,000 on the Road Show’s final weekend in a sweep of the tour’s Dirt Wars doubleheader at Carolina Speedway in Gastonia, N.C., and Lancaster (S.C.) Speedway.

“This was a rare year where we were strong at the beginning, the middle and strong at the end,” Parker said of his banner season. “We had a lot of good luck and didn’t tear up much stuff. So it really was a great year for us every way you look at it.”

Parker, a 20-year racing veteran and former Super Late Model driver now competing exclusively in the Crate Late Model division, knows that sustaining a high level of performance like he was able to do this year isn’t an easy task.

“It’s hard to do,” Parker said. “The easiest races to win in my opinion are the early ones. When you get to those summer months, it gets tougher cause you’re stuff gets wore out and you’re wore out. Then if you make it through the summer, the fall of the year gets a little easier cause things start winding down. But to stay on top of your program and perform well the whole year, that’s not something that happens very often.”

Parker was able to win races early this year, which he believes propelled him to the season-long dominance. He opened the season with multiple wins and strong runs in weekly action at both Carolina and Friendship Motor Speedway in Elkin, N.C. He also kicked off his NDRA Road Show title bid by winning the tour’s opener on May 28 at The Dirt Track at Charlotte.

Getting off to that all-important strong start was made possible by his team’s detailed preparation during the offseason.

“We try and really prepare hard in the wintertime to be ready and get some wins right off the bat to start the year,” Parker said. “Building that momentum early helps get the year going and if you can get a good start it seems like things sometimes just keep picking up from there. And that’s how things went for us.”

With his year full of high points, picking out a favorite moment isn’t easy for Parker. But the victory at Charlotte, which came in front of a packed house on a night when the World of Outlaws Sprint Car Series was also in action, was one of the most memorable.

Winning at the famed 4/10-mile oval that sits just across the street from Charlotte Motor Speedway wasn’t always one of Parker’s main goals in his racing career. But standing in victory lane that night, Parker realized that it was something special.

“I really didn’t know how big of a deal it was until after I won that main event,” Parker said. “My dad, myself and all my crew, we were all down there celebrating and really just tickled to death. I was thinking to myself and realized that it’s a place where everyone wants to win. And there’s been a lot of good racers run there and never win there. So to be able to say we’ve won there, that’s pretty special.”

With one race left before he starts another offseason of hard work in the shop, Parker is looking to close out the year with a victory that would be even bigger than anything he’s already accomplished this year. Parker will make his first trip to Swainsboro (Ga.) Raceway this weekend to compete in the track’s $20,000-to-win Turkey 100.

By competing in the event, Parker will have a chance to see where he stands among the best Crate Late Model racers in the country and also some notable Super Late Model drivers expected to enter the race that ranks as the highest paying Crate race of the year.

“I think we’ve run well enough to go see where we stand against some of those guys,” said Parker, who hasn’t raced since the NDRA finale in September. “We’ve been off for over two months, so we’ve worked hard getting our stuff ready, and we’ll see where we stand over there. I’ve raced against a lot of those guys this year when they come race with us. We’ve ran well against those guys, so I think we’ll be good.”

The 2011 season will go down as the best of Parker’s career no matter how he performs at Swainsboro. But a victory this weekend would not only be a great way to end a great year, but it would also mark the biggest victory of his career.

“We’ve had a great year for sure, but to go down there and win would just be amazing,” Parker said. “It would be huge.”